This report has found an eightfold increase in the number of energy drinks available in 2015 compared to 2002. While no standard definition of an energy drink is used in the scientific literature, it is commonly understood to be a non-alcoholic drink that contains caffeine (usually its main ingredient), taurine, vitamins and sometimes a combination of other ingredients (such as guarana and ginseng, among others), and it is marketed for its perceived or actual benefits as a stimulant, for improving performance and for increasing energy.

As this report will highlight, there is some confusion amongst the public as to what the term "energy drink" means, as some soft and sports drinks, while containing little or no caffeine, use the term ‘energy’ in the product label, for example, Lucozade.

Both the scientific community and the public have raised health concerns about the caffeine and calorie intakes associated with energy drinks and the use of these drinks as a mixer with alcohol. These concerns are disputed by the energy drinks industry.

Two European reports have recently considered aspects of the safety of energy drinks. The EFSA panel on Dietetic Products, Nutrition and Allergies provided a draft opinion on the daily intake of caffeine from all sources that does not give rise to health concerns for both the public and specific population subgroups. This opinion concluded that there was inadequate evidence to decide what a safe level of caffeine intake for children and adolescents is. It does, however, provide levels for daily caffeine intakes from all sources for adults and for pregnant women. Meanwhile, a second review has looked beyond the safety of individual ingredients and concluded that there are valid concerns meriting further research, particularly around certain patterns of consumption and the effects on specific vulnerable groups – notably children and adolescents. 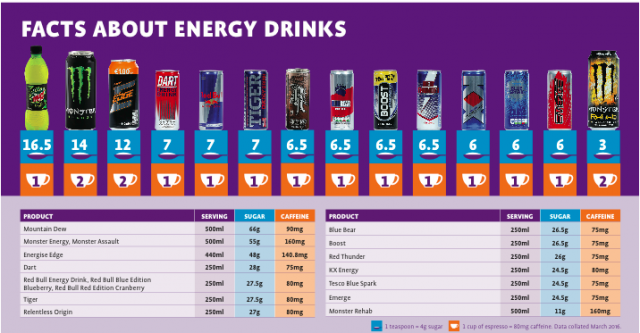 Coronavirus : Nutrition hints and tips for the general...

In these unprecedented times, there is a need...

The Dietitians of the Renal Interest Group of...