Dietitians' Top Tips for Back to School 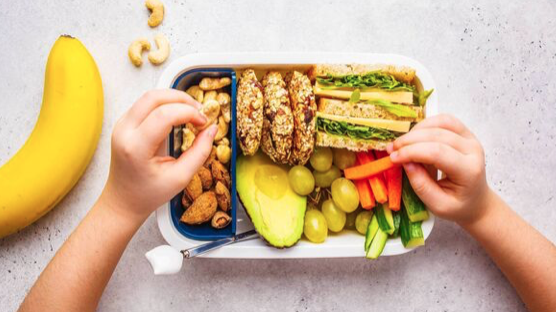 Back to school can be a stressful time for both kids and parents alike. There’s shopping for school supplies, getting back into a normal bedtime routine, and dealing with first-day-of-school nerves.

For parents, there’s the added stress of packing school lunches that are not only nutritious but appealing for their kids to eat. With the onslaught of picture-perfect bento-style lunchboxes taking over Instagram these days, experts say parents are feeling the pressure more than ever.

“That puts a huge amount of pressure on parents and for most people, that’s just not realistic.”

Her advice? Relax and keep it simple. “How your child’s lunch box looks is not a reflection of your parenting skills,” she says. “Every child is different and every family is different. Some children eat a wider variety of food and it may look like their parents put more effort into their lunch boxes. But a 'boring' school lunch is okay, too.”

Here are dietitian-approved tips for packing the best school lunches for your children.

When preparing a lunch box, experts recommend making sure each of the following food groups are represented.

“These are the energy foods like bread, wraps, crackers, pasta, and rice cakes,” says Blaithin O’Neill, clinical lead dietitian at Spectrum Nutrition. “When you’re thinking of putting a lunch box together, I’d recommend first deciding what your carb source is going to be.”

If you’re going for bread, whole grain is preferable. “But if your child doesn’t eat whole grain bread, that’s okay, too,” O’Connor says.

Next, you’ll want to include a protein source. “Protein is very important for children for growth,” O’Neill says.

“These can be put in a sandwich or eaten separately,” O’Connor says. “Some children will eat a sandwich and others won’t.”

If the latter sounds like your child, a bento-style lunch box with separate compartments for different foods can be a great option, she says.

Finish off your child’s lunch box with a bottle of water and some fresh produce. This can be anything from cucumber, carrot sticks, or peppers to bananas, apples, oranges, grapes, or kiwi. There are endless options to choose from but you know your little ones best so pack what they like.

“If you get these three fundamentals down, then you’ve got yourself a balanced lunch,” O’Neill says.

Also be sure to follow your school’s healthy eating policy and check for policies on nut butters and other allergens.

“Apart from that keep it simple,” advises Cathy Monaghan, a senior paediatric dietitian, mum of three, and founder of weaning.ie. “It won’t all be eaten, and there is no need to complicate things in the hope of it being eaten. Provide the main foods groups and leave it at that.”

Always include food you know your child will eat

While it’s perfectly fine to be adventurous sometimes, experts advise mainly sticking to what your kids know when packing a lunch box.

“You don’t want your child to open their lunch box and be shocked by what they see,” O’Connor says. “It’s okay to experiment with new foods and put things in that your child doesn’t necessarily eat from time to time, but most of the food in your child’s lunch box should be food that is familiar to them and that you know they would eat.”

This is especially important for fussy eaters. “Make sure there are foods in a decent portion that they could and would eat if they were hungry,” O’Connor says.

Fussy eating is common among kids, so if your child is suddenly refusing to eat food they once enjoyed, don’t panic.

“The most important thing is not to react to it or make a big deal about it,” O’Neill says. “Usually it doesn’t make that much of a difference if they don’t eat a tomato or another fruit at school. They probably eat a balanced diet anyway.”

She also recommends continuing to pack that item in their lunch box. “It doesn’t have to be every day, but continue to offer it to them because if we don’t, the child has no other opportunity to eat it,” O’Neill says.

Next, instead of dwelling on what’s not being eaten, pay close attention to what your child is eating.

“We always think about what children don’t eat, but make a list of everything your child does eat,” O’Connor says. “Then use that list as a basis for your lunches.”

From there, try to create variety as much as possible. “You can do this even within the same food group,” O’Connor says. “Even if it’s just having different types of sliced pan bread or sometimes cutting the bread in a different shape. That helps children to become more adventurous.”

Finally, don’t compare your child to other kids who eat all their food. “It’s very easy to do, but a lot of times parents of fussy eaters think they’re on their own but it’s so common and the vast majority of children will grow out of it,” O’Neill says.

Remember: the lunch box is not the be all and end all

Parents may get anxious when their kid’s lunch box comes back with its contents uneaten, but usually there is no need to worry.

“This is a common occurrence and is to be expected,” Monaghan says. “Often it has nothing to do with the food. Children have less time to eat than ever.”

“Your child’s whole day of nutrition does not rest on what they eat during those few hours at school,” O’Connor says. “If they don’t eat a lot at school they can make up for it when they come home and have a bigger after school snack.”

For more details on portion size for children check out FSAI

On this WORLD OSTEOPOROSIS DAY 2022 check out...

We are delighted to announce that 4 fantastic...